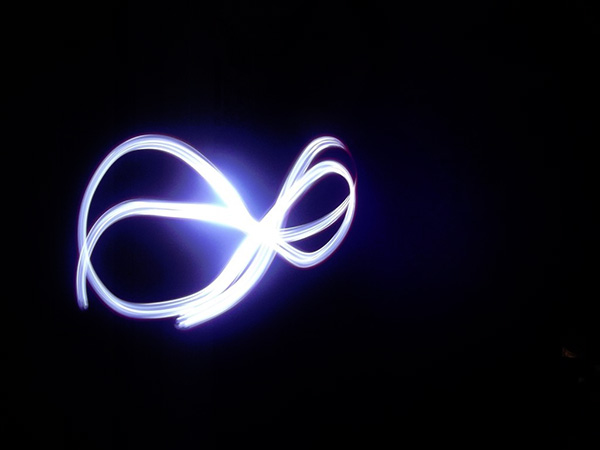 The polynomial functions were having a drink one day at the Absolute Value bar, when Lyn became troubled by a thought.

“Hey, Maud,” she said to the bartender. “Question.”

The modulus function (aka absolute value) approached the young line. “What’s up?”

Lyn pursed her lips. “Okay, so… I’m a line, right? And there’s an infinite number of me. Meaning I don’t have to look like I do now, with the sloped braids in my hair, I could look like however someone else pictures me.”

“Sounds about right,” Maud agreed, cleaning one of his glass cylinders.

“Except all lines look the same,” Lyn continued. “Point A to Point B. In fact, all parabolas look the same too. Big arc. Twintails pointed downwards.” She pointed at Para, across the room.

“But you could have different slopes, just as Para can have different vertices,” Maud objected. “That’s what makes function personifications unique. I mean, ignoring that you have the power to adopt numerical coefficients, and thus look like any equation.”

“Yes, I know,” Lyn sighed. “And there’s an infinite number of parabolas through two points.[1] But what I’m saying is forget the grid. Lines are lines. Quadratics are parabolas. Whereas cubics, somehow those have more depth.”

“Huh? Lyn, cubics are in two dimensions like the rest of us,” Maud said, frowning.

“No, Lyn’s right,” Cubi remarked, coming up behind the two of them. She leaned against the bar. “I was actually wondering if anyone would bring this up one day. Sometimes my graph will inflect. Sometimes not. In theory, I should be triplets.”

Cubi nodded. “All of my shapes basically collapse down to three cases,” the cubic function explained. “You’ve got the basic cubic, ‘x^3’. Then you’ve got ‘x^3 – x’, which fully factors, and has two turning points. Finally you’ve got ‘x^3 + x’.[2]”

Lyn frowned as she traced the shape of that graph in the air. “Wait, that has no turning points or stationary points of inflection. That’s a thing?”

Maud nodded his head. “I get what you meant now, Lyn. Any quadratic graph is a standard parabola, suitably reflected, dilated and/or translated. Not so for cubics. No transformation can make the shape of ‘x^3’ into ‘x^3 – x’.”

“Technically less,” Cubi pointed out. “Since my x^2 and constant terms can collapse down. It’s partly why I have a solving formula.”

“Oh, sure, bring up the fact that you have a formula,” Quinn remarked, having overheard and approached. “As if you’re special or something. No one remembers yours, Cubi, they only know the quadratic one.”

“Here’s something that might blow your mind though, Lyn,” QT said. She made a point of jumping into the conversation then, to avoid a dispute between the cubic and quintic polynomials. “As a quartic, I have infinitely many curves.”

“Which means my graphs are all over the place too,” Quinn remarked.

“In infinite combinations!” Maud finished, raising his hand in a V-shape. He grinned, then looked around at the others. “The basis of Vulcan philosophy. Star Trek. Triangle and circle coming together. Anyone? Hello?”

After a pause, QT spoke up again. “Sure, combinations like C(n,r) can help in figuring out polynomial coefficients.”

Para then cleared her throat, speaking up for the first time. “Thing is, there’s different types of infinity.” She looked around at the others. “Integers are infinite. Rational numbers are infinite. Those are the same infinity. Irrationals are a larger infinity. In the end, does it matter that all my quadratics are shaped like parabolas?”

“I guess not,” Lyn yielded. “Just made me wonder. I mean, is Cubi was troubled by split personalities or something?”

Cubi rubbed her chin. “I don’t think so?”

Quinn leaned back on the bar. “So was there a point to this conversation?”

Para half smiled. “Perhaps it’s that infinity doesn’t mean ‘everything’. It simply means there’s no end. To math, or math personifications. We go to infinity, and beyond.”

Maud pointed at her. “Is that a deliberate movie reference, or are you messing with me?”

“Either way, there’s also Polar graphs. We don’t have to stay Cartesian,” QT pointed out.

“Let’s not make this complex, I’d rather we enjoy our drinks,” Lyn decided. “Next round is on me.”

For the next little while, everyone sat quietly, listening to ‘Tether’ from Eric Prydz and Chvrches[4] playing on the jukebox.